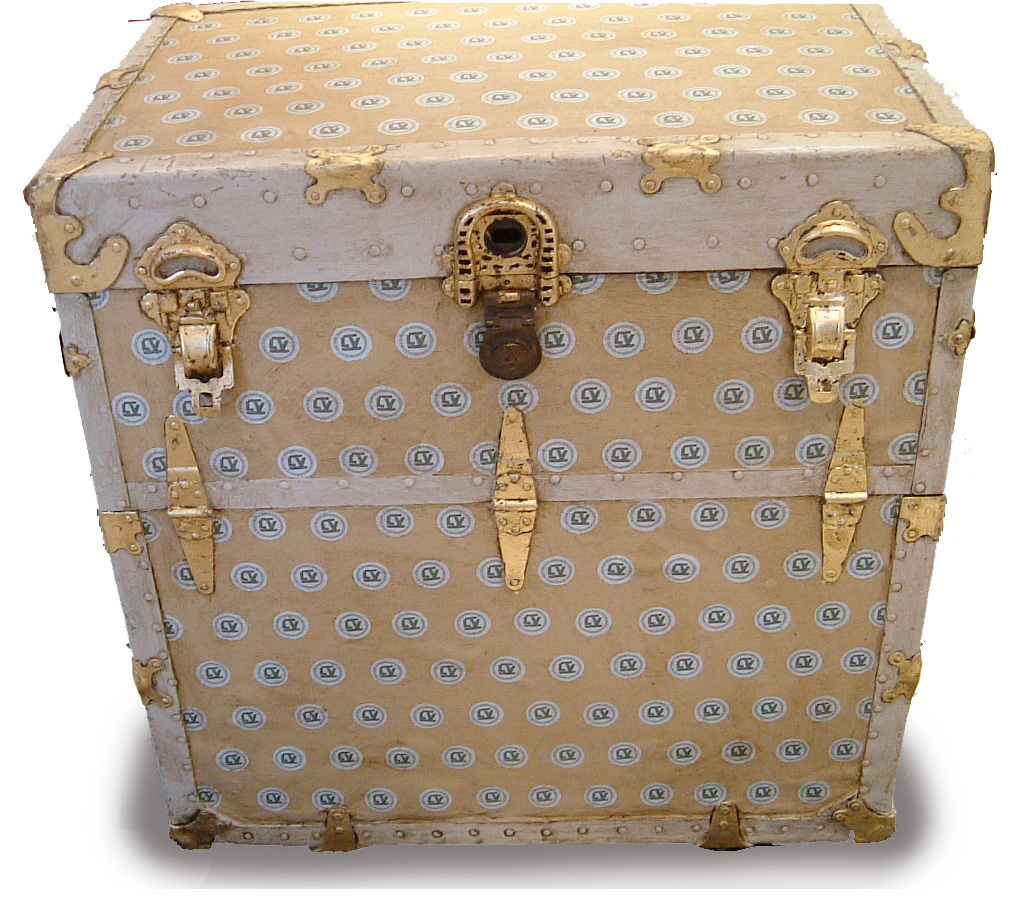 The purpose of this artwork is to lampoon branding and the gullibility of the public's support for it.

Branding, The word "brand" is derived from the Old Norse word brandr meaning "to burn." It refers to the practice of producers burning their mark (or brand) onto their products including their livestock. 'Chyawanprash' is the oldest Brand, used continuously in India, since the Vedic period, 9000 - 10000 years ago. It is still widely used in India and many other countries and is a herbal paste.

Today the public rely on purchasing brands for a repeat of the product consumed/used or worn. Until recently, this practice was used on the packaging items which were soon discarded. Since the latter part of the 19th century some companies would exploit this practice by deliberately making their brand name visible on actual items and not just the packaging, so that it remains in the public domain and acts as an advertisement once sold. This marketing dream, which ensures free advertising, can only be fulfilled by the company if gullible members of the public make the initial purchase. Those who do, appear to be oblivious to their being exploited as a moveable advert and incredibly they also knowingly pay more money for the product because they believe it has a higher intrinsic value.

A Luncheon Voucher as displayed in a cafe window.

In order to snap the gullible public out of the insidious spell woven by the manufactures of these tacky sordid items, we have created a branded trunk. Here you will not find the Louis Vuitton LV logo but another more humble LV logo, that used by Luncheon Vouchers in the 1950's 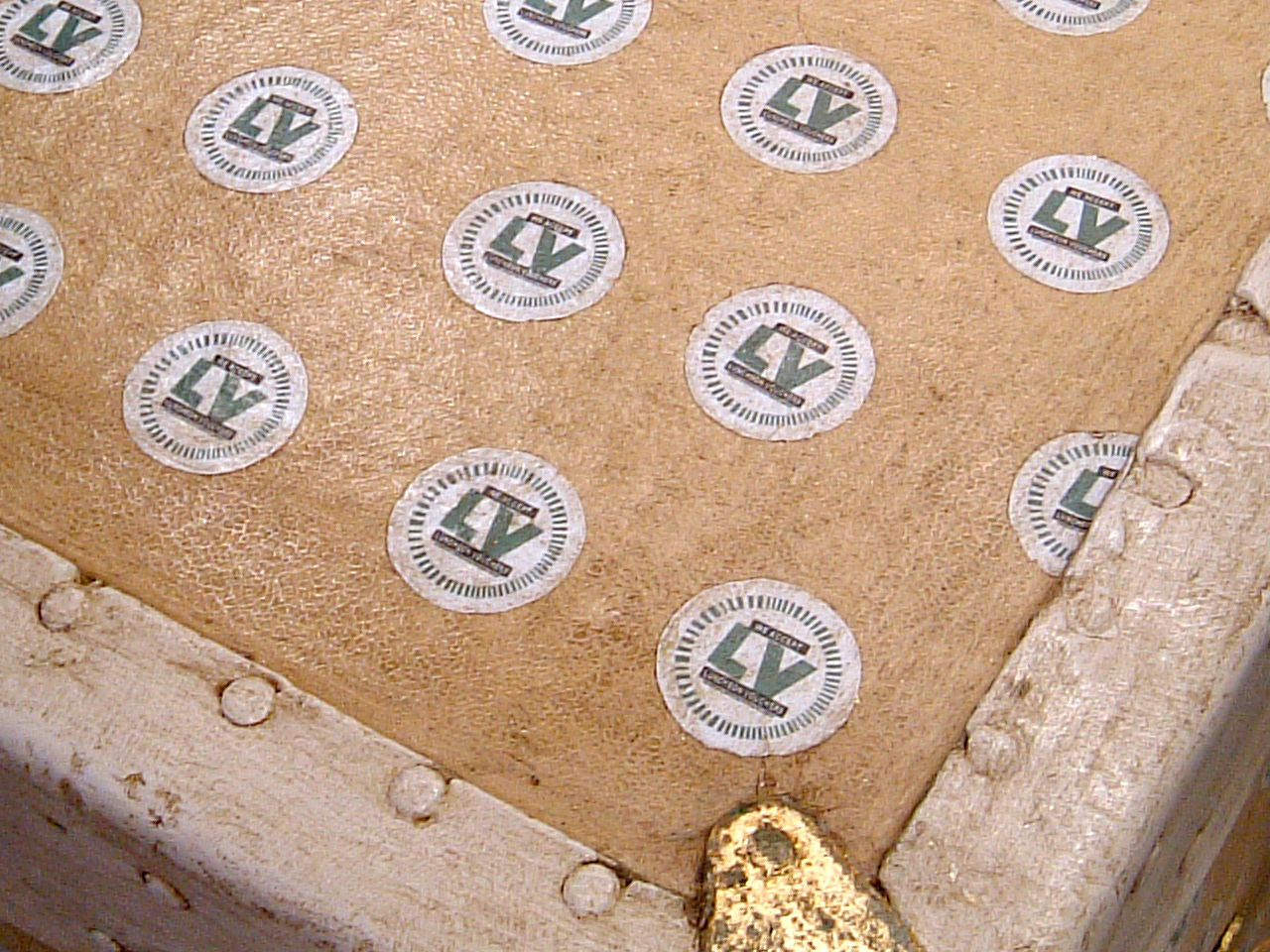 An old steamer trunk was acquired and stripped back, embossed papers applied to give the appearance of new leather, and then individual miniature Luncheon Voucher logos were made, printed and stamped out and applied. The choice of Luncheon Voucher being apt as the vouchers were designed for companies to issue to workers instead of part of their wages, so that they ate a square meal during the day and did not "waste" their money on alcohol leading to poor work production. 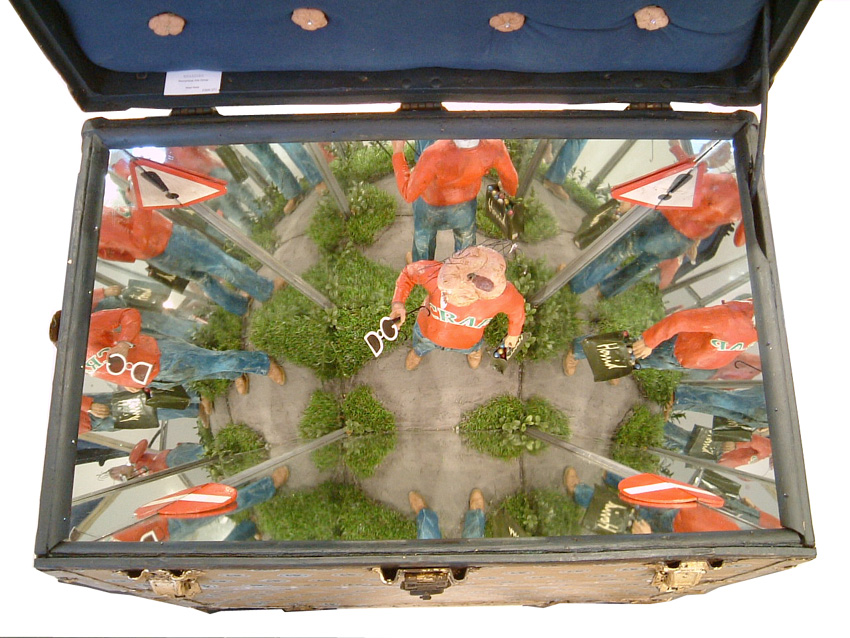 Note on the inside lid are found minatue arseholes with fibre optic illumination.

On the inside of the trunk, by using 4 angled mirrors, converging at the correct angle to the base where a section of a 43" diameter sphere was placed.. The 43" sphere section is multiplied in the reflection of the 4 panes creating a 43" diameter globe. This is an illusion in its own right as the globe seen at the bottom of the box is far greater than the trunks smaller aperture. 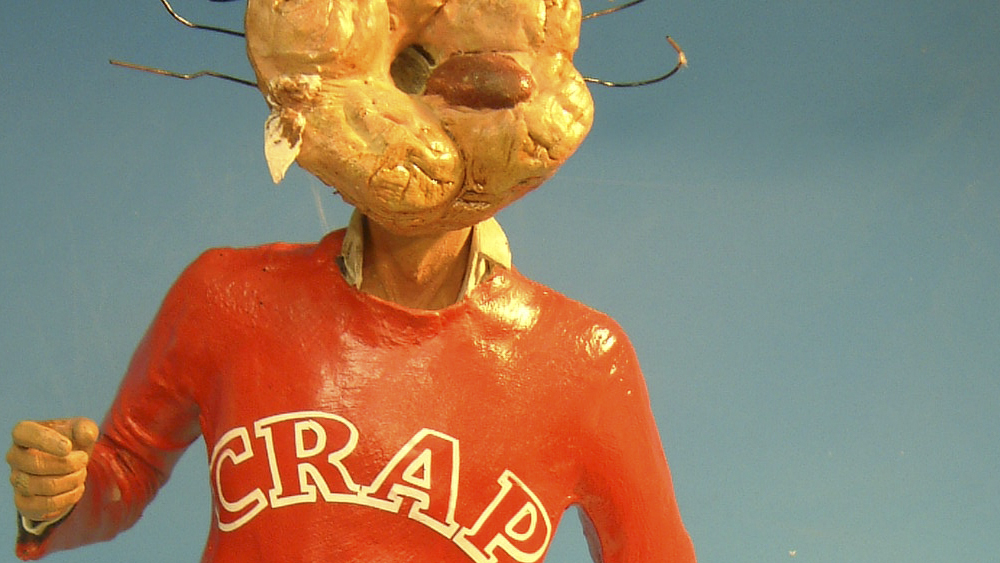 Standing on the globe we placed a figure whose head was removed and replaced with a giant Arsehole complete with hemorrhoid, pubic hair, shit, and lodged stained lavatory paper. 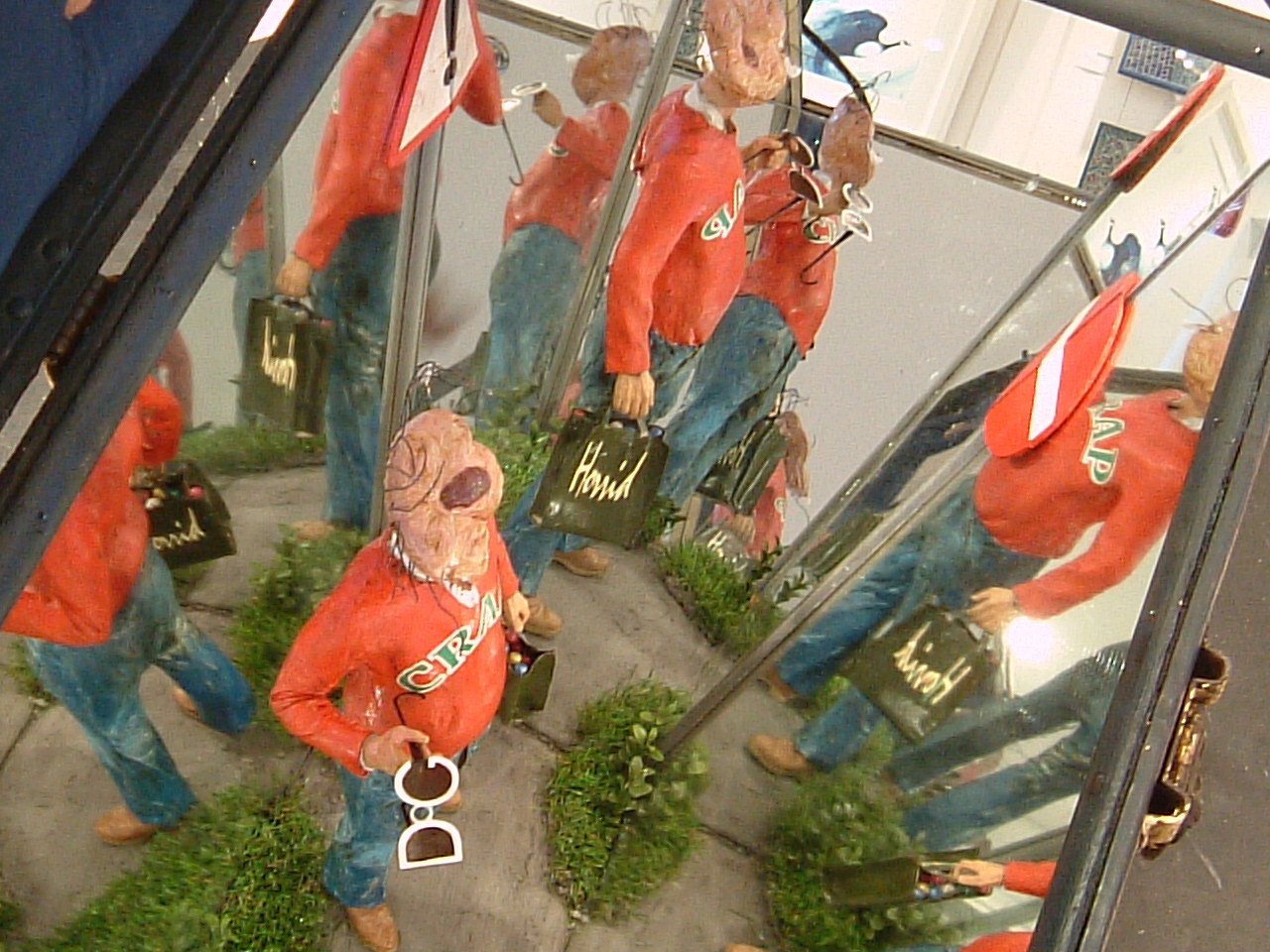 Instead of a shirt advertising GAP the arsehole's shirt says CRAP, in his right hand his designer sunglasses do not say D&G but DOG in his left hand he holds a dark green bag with lettering normally associated with Harrods but here the text appears illegible until one reads the text in one of the mirrored sides where its reflection says HORRID. 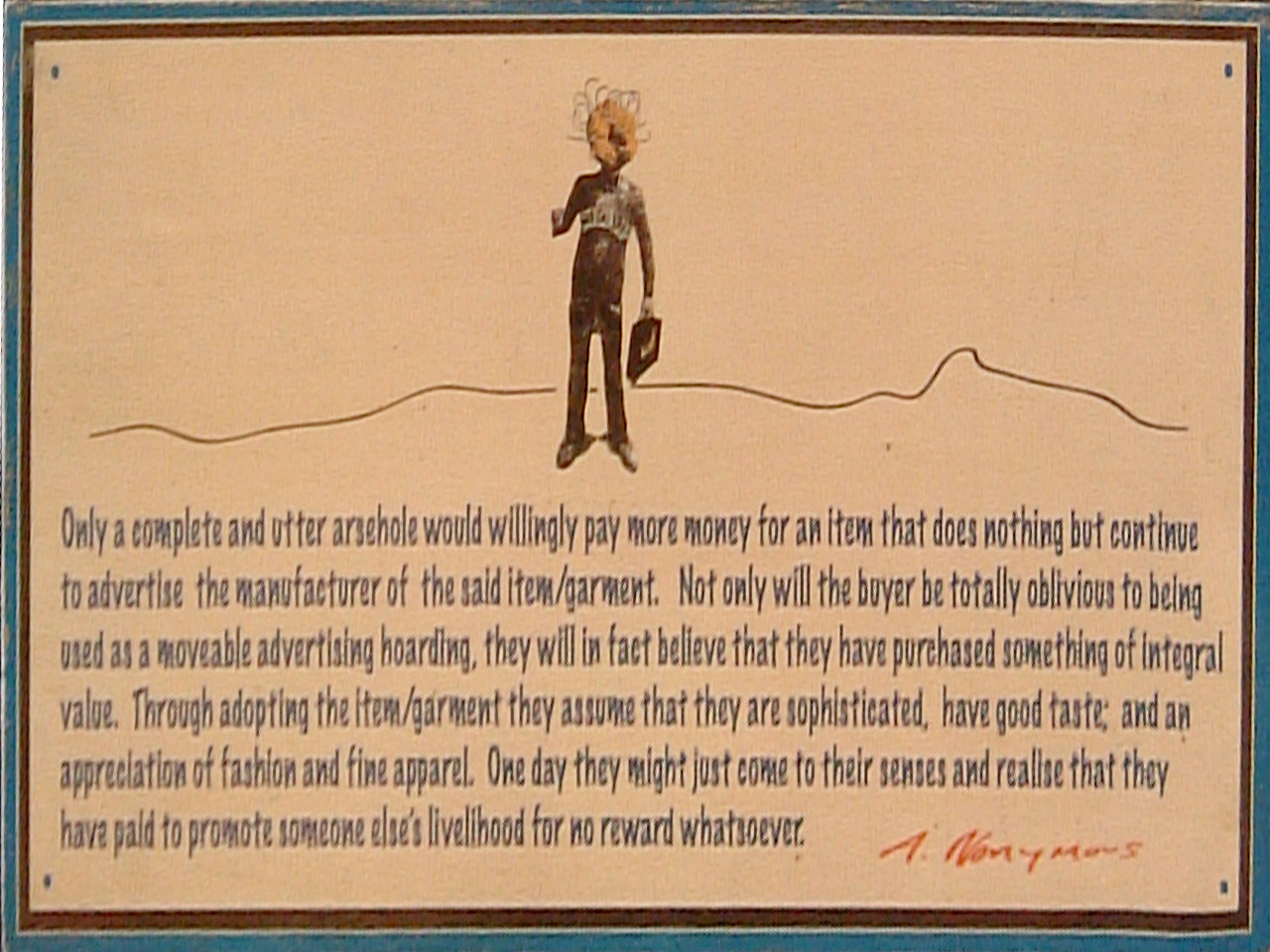 Inside the lid of the trunk is a label which depicts a sketch of the Arsehole figure, and below it is the following statement:

to advertise the manufacturer of the said item/garment. Not only will the buyer be totally oblivious to being used

as a movable advertising hoarding, they will in fact believe that they have purchased something of integral value.

Through adopting the item/garment they assume that they are sophisticated, have good taste and an appreciation

of fashion and fine apparel. One day they just might come to their senses and realise that they have paid to promote

someone else's livelihood for no reward whatsoever. A. Nonymous

To disguise the edges of the mirrors a quarter section street sign was positioned, likewise clumps of grass were placed on the corners of the globe base. To reveal an arsehole surrounded by others on a solitary panet oblivious of their self imposed exile.

In this country adverts are usually placed only on land or property belonging to the owner or third party for financial gain e.g. if one travels by train and the train wishes to generate an additional revenue stream, it sells advertising space. Councils also sell advertising space in their boroughs and this revenue reduces the cost of the borough's ratepayers. Should there not be a law that if someone is making these products, that blatantly advertise, through finding gullible members of the public who are then inflicting us with their unsolicited advert, then they should pay an "Advertisement Tax" for doing this, possibly the tax being used to offer free education classes to vulnerable impressionable people that are being exploited and appear to act like a complete arsehole in doing so. 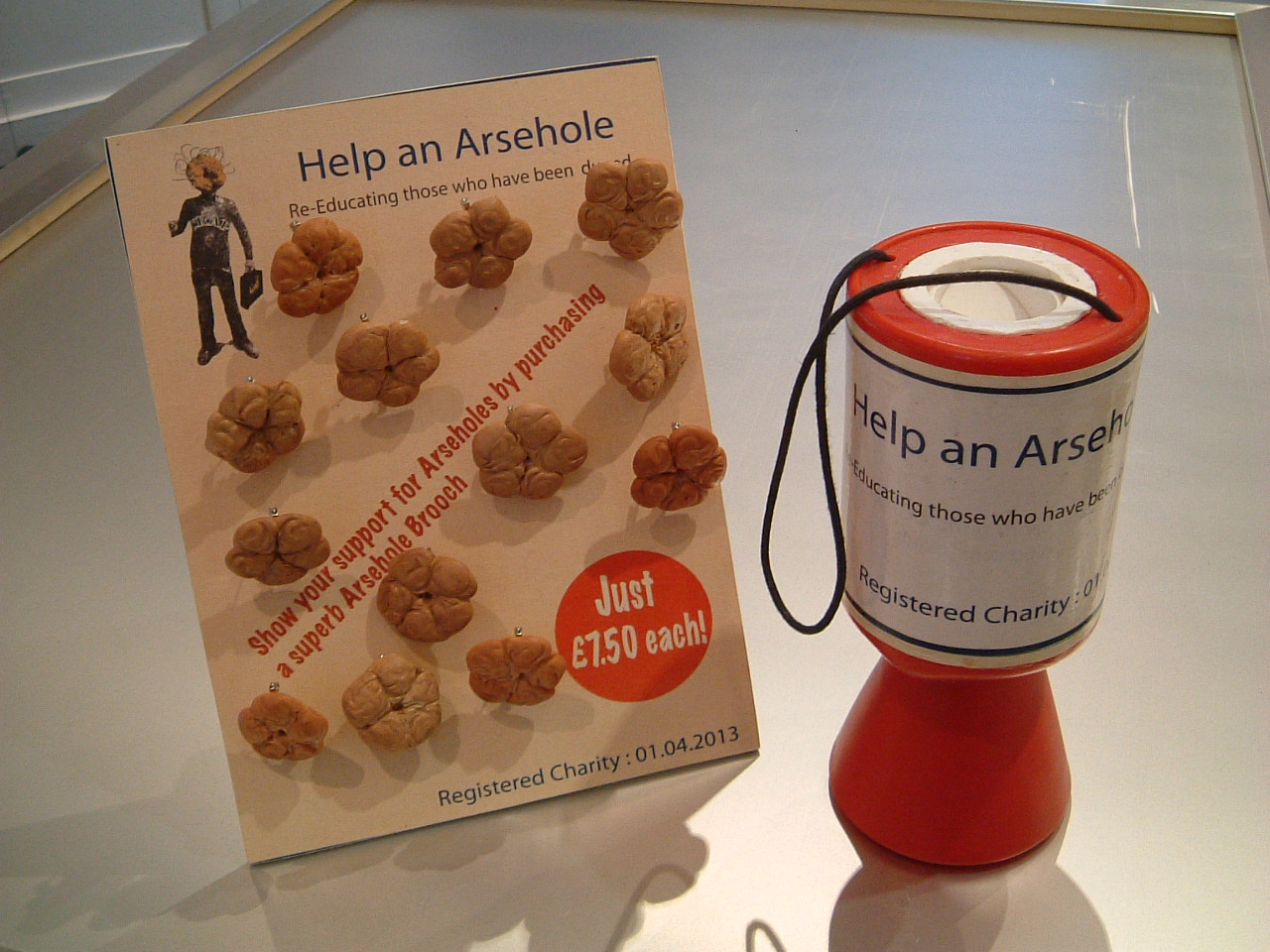 Help an Arsehole reg charity 01.04.2013 Re-Educating those who have been duped.

arse«hole`( rs«hoøl`) n. Excretory opening at the end of the alimentary canal.

Nothing (apart from manure) of any use comes out of an arsehole which is why it is avoided, seldom discussed and seldom seen in public. Anon.

This 'Artwork' titled Branding is available for purchase with the proviso that if re-sold any profit above the purchase price will be given to registered charity Rainforest Concern.

Back to Brentford Gallery home page